Samsung will have a Galaxy Unpacked event next month, on February 8, 2022. The Samsung Galaxy S22 series will be presented during the event, which will be streamed live. The Galaxy S22, Galaxy S22 Plus, and Galaxy S22 Ultra are the three premium smartphone models in the new lineup. At the same time, Samsung is expected to unveil three new high-end tablets. 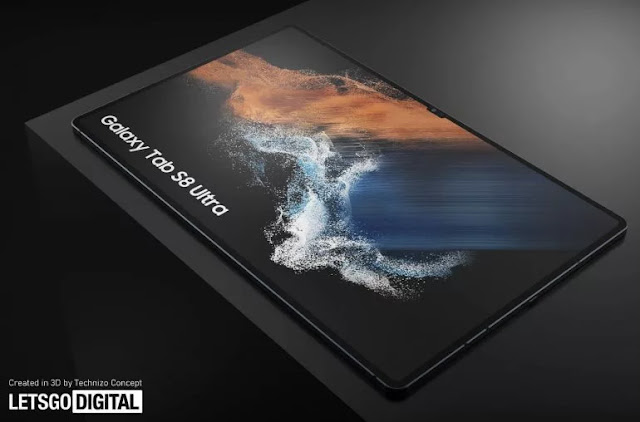 the Galaxy Tab S8, Tab S8 Plus and  Tab S8 Ultra. These are the successors of the Galaxy Tab S7 and  Galaxy Tab S7 Plus released in mid-2020. They are the most advanced Android tablets you can buy and therefore formidable competitors to the popular Apple iPad models. The Samsung Galaxy Tab S8 Ultra will be a completely new, extra advanced and extra-large model. The 5G tablet will have a giant 14.6-inch Super AMOLED screen.

Much has been said and written online about Samsung’s highly anticipated high-end tablets lately. Based on all the information already available, LetsGoDigital has created a series of product renders of the new flagship model: the Galaxy Tab S8 Ultra. Of note on this model is definitely the notch for the camera. Samsung has never released a tablet with a notch before. 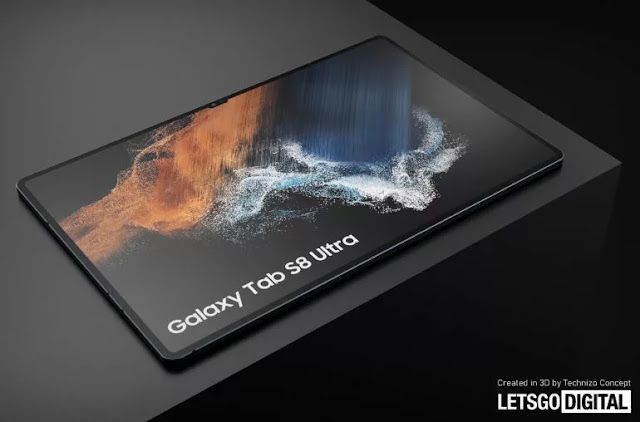 The Tab S8 Ultra, therefore, gets noticeably narrower screen bezels than before, so  Samsung is simply forced to look for a different solution for the front camera. can be used without increasing the size of the device. This benefits portability and ease of use. The Tab S7 Plus has already been praised for its beautiful AMOLED display (12.4-inch, WQXGA+ resolution, 120Hz), the new Ultra model will undoubtedly deliver a visual even better. The top model will be equipped with a 14.6-inch display with  WQXGA+ resolution (2,960 x 1,848 pixels) and a 120Hz refresh rate. Peak brightness is 420 nits. The screen is protected by Corning Gorilla Glass 5, as was the case with its predecessor. a wide-angle lens and an ultra-wide-angle lens. Both are equipped with a 12-megapixel image sensor. 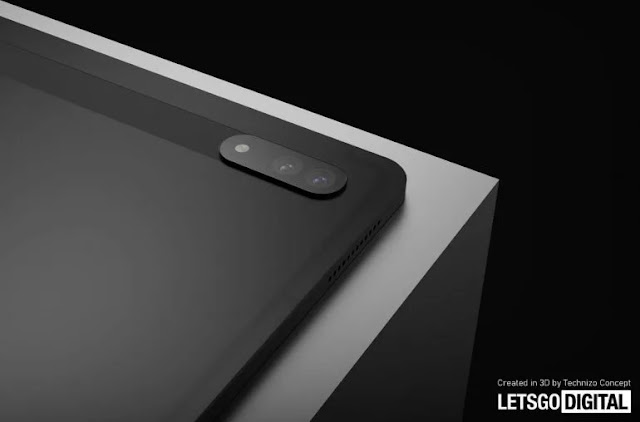 Videos can be recorded in 4K resolution at 60 fps, with both lenses. According to the South Korean SuperRoader, this time Samsung will also add auto-framing – similar to Apple’s Center Stage feature. The auto framing feature was first implemented in the Samsung Galaxy Z Fold 3 foldable phone and ensures that the subject always stays in focus when recording a video, ideal for hands-free video recording, such as a vlog. The camera will automatically follow your movements and continue to focus.

S Pen has been redesigned to have a shorter latency.

Of course, the new flagship will also offer support for the S Pen, so you can work more productively and creatively. Samsung will improve the stylus again. The Tab S8 Ultra will get an S Pen with a latency of just 2.8ms, according to Ice Universe. In practice, this means that writing with the S Pen feels as natural as with a regular pen. Latency has also been reduced with the Tab S7 Plus’ S Pen stylus. Previous models had a latency of 26ms, this was reduced to 9ms with the Tab S7+. 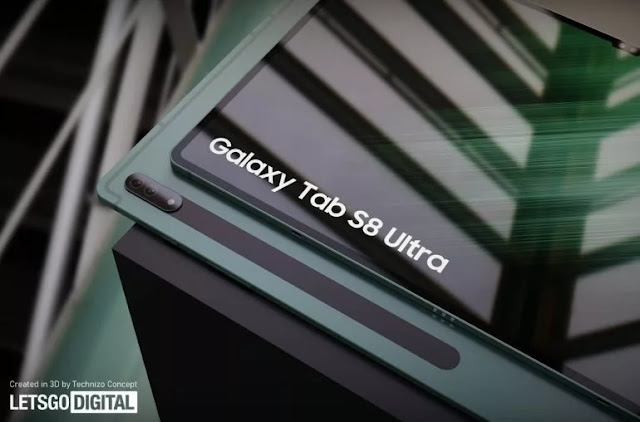 The Galaxy Note 20 Ultra and S21 Ultra are also compatible with a 9 ms S Pen. This time, Samsung takes a step forward with a delay of just 2.8ms. This applies to both the Samsung Galaxy Tab S8 Ultra and the Galaxy S22 Ultra. You can magnetically attach the stylus to the tablet, both on the back and on the top. This greatly reduces the risk of the S Pen continuing to wobble somewhere. Samsung also automatically alerts via software if the S Pen is out of range of the tablet. The new tablet will be equipped with Android 12, in combination with the One UI 4.1 user interface. Under the hood is the super-powerful Snapdragon 8 Gen 1, it’s the latest and most powerful mobile chip from Qualcomm. 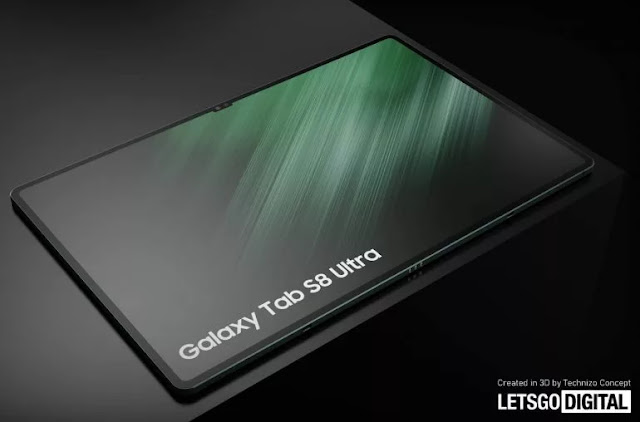 For a long time, it was thought to be the Snapdragon 898. Samsung, on the other hand, appears to want to make the new tablets as powerful as possible. The Ultra model has more memory. Several memory variants are being released.It comes with 8GB / 12GB / 16GB RAM and 128GB / 256GB and 512GB storage memory.Support for a microSD memory card will be maintained.

Additionally, the Samsung Tab S8 Ultra is equipped with a dual stereo speaker system with Dolby Atmos support. A dual camera is also positioned on the back. A 13-megapixel main camera is used for this, along with a 6 MP ultra-wide-angle camera with autofocus and  LED flash. The tablet can be unlocked via the in-screen fingerprint sensor or via facial recognition technology. the largest tablet ever released by Samsung. For this reason, too, this multifunctional multimedia device also has an extra-large  11,200 mAh battery. 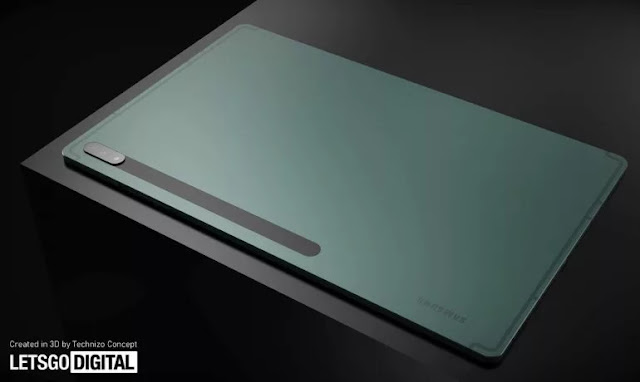 Details on the charging speed are still unknown. Presumably, the Galaxy Tab S8 Ultra will support 45W fast charging, just like the Galaxy S22 Plus and Galaxy S22 Ultra. Charging takes place via the USBC connection on the side of the device. An original charger will probably not be included. The tablet weighs 728 grams. It is also significantly heavier than the Tab S8 Plus (576 grams). The dimensions are: 208.6 x 326.4 x 5.5 mm. Additionally, Samsung’s Android tablet supports WiFi 6, Bluetooth 5.2 and optional 5G support.

Facebook Twitter LinkedIn  A Samsung Galaxy A53 5G is about to be released, and 91mobiles has got live shots of the device. The Samsung Galaxy…