The Samsung Galaxy S22 Ultra is not only one of the most spectacular flagships ever manufactured, but it’s also the definitive replacement for the Galaxy Note series. It contributed to Samsung’s phenomenal pre-order numbers following the launch: the Galaxy S8 range did not sell nearly as many units in the first few months. Is it, however, a worthy representative? Is it possible that it will outperform Apple’s iPhones? This is a comparison between the greatest Samsung phone right now versus the best Apple phone right now: the iPhone 13 Pro Max. The best handset depends on the person, however, this comparison will show you the advantages and disadvantages of each handset. 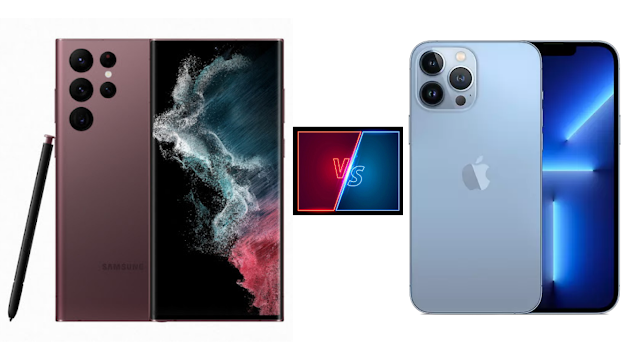 The iPhone 13 Pro Max has a better build quality than the Samsung Galaxy S22 Ultra since it has a stainless steel frame (rather than an aluminium frame) and a glass back with Ceramic Shield protection. It also has better water resistance: it has the same IP68 certification as the Samsung competitor, but it is waterproof up to 6 metres deep for a maximum of 30 minutes, rather than the 1.5 metres most waterproof Android phones have. If you don’t like the notch, the Galaxy S22 Ultra with a punch-hole and curved display protected by Gorilla Glass Victus Plus would be a better option.

The Samsung Galaxy S22 Ultra has outstanding display characteristics on paper. It includes a 6.8-inch diagonal and an LTPO AMOLED display with an adjustable refresh rate of 1 to 120 Hz, a Quad HD+ resolution of 1440 x 3088 pixels, HDR10+ certification, and compatibility for the S Pen for handwriting and drawing, which can be incorporated in the phone due to a dedicated slot. Despite having lower capabilities on paper, the iPhone 13 Pro Max’s image quality is remarkable, especially for its near-perfect colour reproduction. It features an OLED display with a refresh rate of 120 Hz and HDR10+ certification. The Samsung Galaxy S22 Ultra has an in-display fingerprint reader for identification, but the iPhone 13 Pro Max uses Face ID, which uses a separate sensor near the front camera to do 3D face recognition.

Although the Samsung Galaxy S22 Ultra has a larger battery than the iPhone 13 Pro Max, this does not always imply that it has longer battery life. In certain instances, the iPhone 13 Pro Max lasts longer on a single charge owing to the level of optimization given by the iOS operating system. The Galaxy S22 Ultra, on the other hand, charges faster owing to its 45W fast charging technology, despite the fact that it does not allow magnetic wireless charging (unlike the Apple flagship).

The advantages and disadvantages

⚈Support for a large display pen

Facebook Twitter LinkedIn Visitors may have been informed that Samsung is now making the One UI 5.0 beta available. Today, the first beta build for…

Facebook Twitter LinkedIn  Apple announced today that it will be holding a special event on Tuesday, September 14 at 10:00 AM PDT. The event will…

Facebook Twitter LinkedIn According to Apple analyst Ming-Chi Kuo, only the iPhone 14 Pro versions will contain the “A16″ CPU, while the normal iPhone 14…