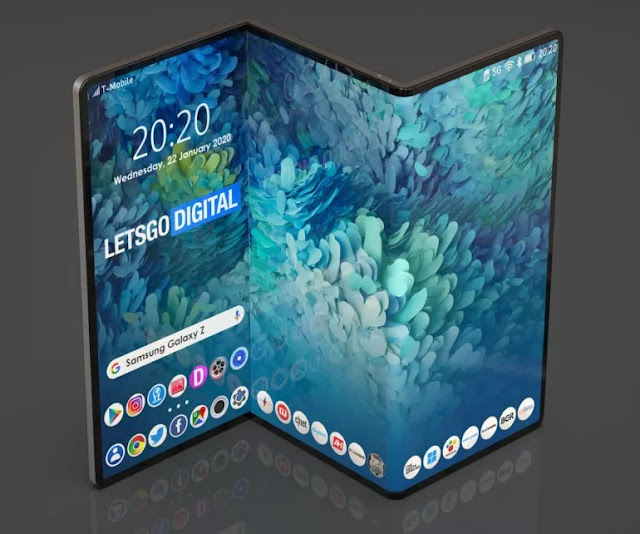 In addition, the South Korean manufacturer seems to be actively developing a tri-fold smartphone. Earlier this year, it was speculated that Samsung’s first dual-folding phone was slated for late 2021. We now know that plan won’t be realized. Despite this, the development of this Galaxy foldable phone continues steadily. For example, in August of this year, Samsung Display presented a preview of a “Galaxy Z Flex” which can be folded into 3 parts. Meanwhile, Samsung Electronics is developing new technologies and possibilities to take the user experience of a tri-fold phone to the next level.

On March 26, 2021, Samsung Electronics filed a patent with the World Intellectual Property Office (WIPO) for an “electronic device and method of sharing the battery in an electronic device”. The 72-page documentation was released on November 11, 2021. The full documentation focuses on a Samsung tri-fold smartphone with reverse wireless charging technology. The South Korean manufacturer has long offered a reverse wireless charging option for high-end Galaxy S-series and Note smartphones, also known as Samsung’s Wireless PowerShare, and since the introduction of the first Galaxy Fold, this technology has also been found in models. of folding Samsung phones. 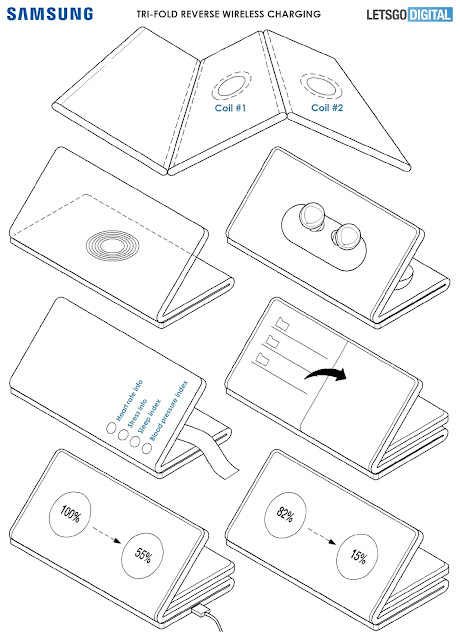 With a smartphone with reverse wireless charging, you can use the phone’s battery to charge other devices, such as Galaxy Buds, a smartwatch, or another phone. The patent documentation shows that Samsung also wants to implement this technology in its trifold smartphone. Since the phone consists of three parts of the screen, the necessary adjustments will be made. Wireless power transmission is located in both the second and third parts of the housing. In this way, the user can place the device to be charged between the foldable phone, after which the charging begins the process, as shown in the patent images above. Normally, you should place the device on the back of the phone. By placing the device to be charged between the two parts of the screen, better power transfer can occur, according to the documentation. Speed ​​gains can also be achieved because two wireless charging coils are integrated instead of one.

The Samsung tri-fold case will also come with a cover screen. The user is informed of the necessary information via the front screen. Consider, for example, a battery indicator, so you can see how far the charging process is complete. In addition, Samsung’s tri-fold smartphone will be able to display information depending on the device being charged. For example, if you charge your smartwatch, health information such as heart rate, stress level, sleep index, and blood pressure will also appear on the front display. 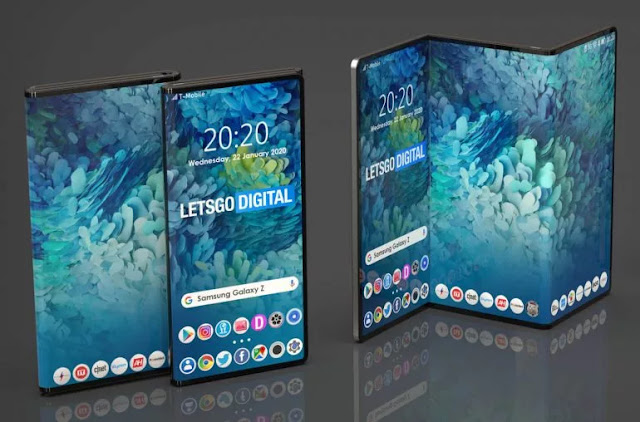 It seems like it’s only a matter of time before it officially introduces the first Samsung. smartphone with a foldable dual-screen. Samsung Display has already proven that it can produce such a type of screen. Meanwhile, Samsung Electronics is actively developing new features. The documentation has been written in so much detail that we think it’s plausible that the Samsung Triple will actually have reverse wireless charging in the future. We may hear more about this innovative Samsung smartphone over the next year or so.

The attention of the rumour mill has switched to Samsung’s forthcoming smartphones now that the Galaxy S22 series has been released internationally. The first probable picture of the Galaxy Z…

Samsung has dispelled any remaining doubts that the upcoming Galaxy S series device would essentially be a Galaxy Note 20 successor. The Galaxy S22 Ultra is believed to include a…

Samsung will have a Galaxy Unpacked event next month, on February 8, 2022. The Samsung Galaxy S22 series will be presented during the event, which will be streamed live. The…

91mobiles was the first to reveal that Samsung’s facility in Greater Noida has completed mass manufacturing of the Galaxy A13 4G phone. We think that the phone will be released…

samsung’s first fan edition tablet is coming soon, as evidenced by means of the severa appearances it has been making all around the net these days. From spec and press…

Inside an ultra-thin, premium form factor, the Snapdragon 8cx Gen 3 processing platform provides extraordinary performance and economy. Support for a multi-day battery life ensures a computing experience that is…