Samsung has now officially launched the Galaxy Z Fold 3 and Galaxy Z Flip 3 foldable phones. Samsung won’t be launching new high-end devices until the first quarter of 2022. New Samsung S22 devices are scheduled to launch at this time. The flagship model will be the Galaxy S22 Ultra. The Galaxy S22 and the Galaxy S22 Plus will have slightly different designs. It is also expected that Samsung will use the Note’s rounded screen design and straight-line design on the new S22 Ultra. Recently, we’ve been focusing on the 2022 Series models. 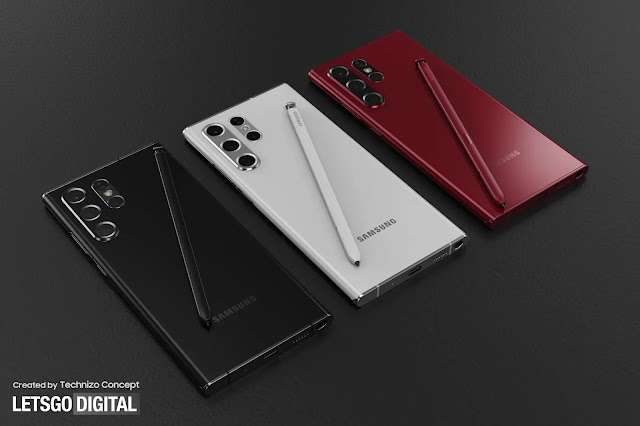 Based on all the rumours and speculations, graphic designer Parvez Khan, aka Technizo Concept, has created a series of 3D renderings of Samsung’s expected flagship in collaboration with LetsGoDigital. The Galaxy S22 Ultra is shown in black, white and dark red. According to Ice Universe, this is “Burgundy Red”, as we know from the Galaxy S8 and S9.Technizo Concept has also integrated this color palette into the renderings of its products. 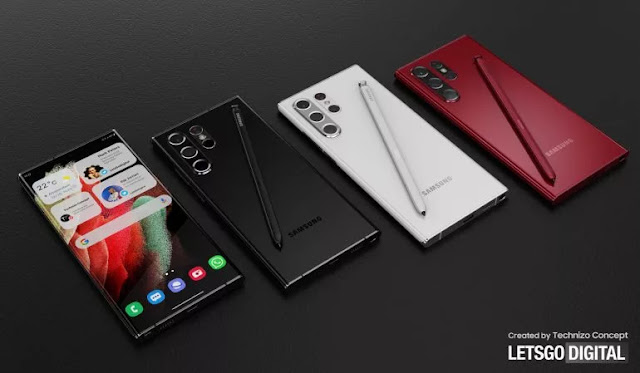 While a lot is already known about the design, there are still some uncertainties regarding the rear camera system. A while back, OnLeaks released renderings of the Galaxy S22 Ultra showing a P-shaped camera island. Many weren’t exactly thrilled with the new camera design. Soon after, Ice Universe responded via Twitter. The Chinese telecommunications leaker believes Samsung will opt for a two-piece camera island, with some space between the left and right sides of the camera system. Based on this report, OnLeaks commissioned new product renderings where both camera designs are displayed. Over the weekend, blanket maker Pigtou posted a YouTube video online showing an aluminium mannequin of the Samsung S22 Ultra. 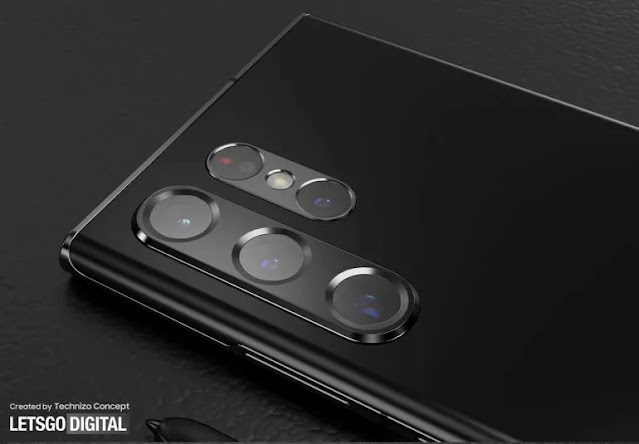 The images show a P-shaped camera design, similar to OnLeaks renderings. Some believe this is the final draft, however, that cannot be said for sure.Such dummy phones are used, among others, by shell manufacturers, such as Cover Pigtou, to be able to develop phone cases adapted to the new range. This means that only the outline of the camera system is known and not the interior. Take a look at this case for the Galaxy Note 10 Plus.

For the rendering of the product Technizo Concept has chosen a middle path. The outline shows a P-shaped design, similar to the aluminum mannequin. However, by making it a two-part camera island, the design is more in line with the existing Galaxy line. In addition, another important advantage presents itself: the weight. With the Galaxy S21 series, Samsung has chosen to set up a relatively large metallic photo island.

This also results in the necessary weight gain. With a weight of 228 grams, the Galaxy S21 Ultra is one of the heaviest phones. The Samsung S22 Ultra will be equipped for the first time with an S Pen compartment, which will also contribute to the necessary additional weight. A two-part camera island can be an ideal solution to compensate for this extra weight. the weight seems to remain the same as the current model.

Digital zoom range information is not yet available, Space Zoom 100x function may be retained. The new Zoom Lock function will probably also be present in the new model. This function ensures that the subject remains in focus even when the zoom is far away. This is very useful, because when you zoom in, every little shake and movement of your hand becomes visible. Thanks to the zoom lock function, zoomed photos appear significantly. For the first time, all four cameras will also be equipped with optical image stabilization to counter motion blur. Previously, the ultra wide-angle camera was not equipped with OIS. The laser autofocus sensor will probably also be present on the new one of course, the necessary attention will also be given to the video features. Recording and sharing of videos has become more and more popular in recent years.

Manufacturers like Samsung therefore continue to bet on new video features. For example, the S21 Ultra was equipped with Director’s View. A convenient function that allows you to change lenses while recording video. Logically, the new model will again support 8K videos. As for the front camera, Samsung should again incorporate a 40-megapixel punch-hole selfie camera. For a long time, it was believed that Samsung would provide the new flagship model of the S series with an under-display camera. This technology is already available on the Galaxy Z Fold 3 foldable smartphone. With this device, however, the front camera is still quite visible and the camera quality is inferior to traditional selfie camera systems.

With the Fold 3 this is not a problem, as there is an additional selfie camera available through the cover screen. This will obviously not be the case with the Galaxy S22 Ultra. Thus, Samsung seems to be playing it safe by implementing an “old-fashioned” hole-punch camera system. Meanwhile, Samsung will further develop the under-display camera (UDC) technology. The Galaxy S23 Ultra will likely be equipped with a UDC. So much for the camera system.