This fall,   Google will release the Pixel 6 and Pixel 6 Pro. It will also release the Android 12 operating system. But Google doesn’t seem to be stopping there. There have been several reports recently indicating that Google is planning to launch its first foldable smartphone by the end of 2021. 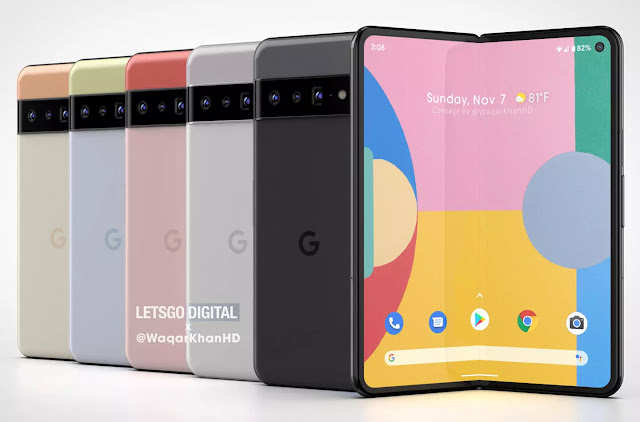 Pixel Fold could be the name of the device. There is likely to be a flexible display inside Google’s first foldable phone. The highly anticipated Google Pixel Fold was imagined as a series of 3D renderings by graphic designer Waqar Khan in collaboration with LetsGoDigital. It is reminiscent of the Pixel 6 series. A front display with a punch-hole selfie camera can be seen on the Google Pixel Foldable Phone Pixel Fold renderings. The camera is positioned in the upper left corner. In addition to the thick edges, the bezel is quite thick as well, which is to be expected. Even though it is a foldable phone, it is a tablet when the user opens it, allowing a large screen.

The upper right corner contains another hole-punch camera. A hidden hinge is used for similar reasons to those used by Samsung. A patent application describing a “multi-axis soft hinge mechanism and folding device with the same was also filed by Google LLC on September 23, 2021. When the device is folded, only a small seam appears on the device’s 58-page documentation, which outlines an advanced hinge mechanism. According to research, Google might use the hinge patented by LG to build the Pixel Fold. The design of the patent hinge can also be used for clamshell foldable smartphones, so not only a smartphone but a tablet would benefit from this design. 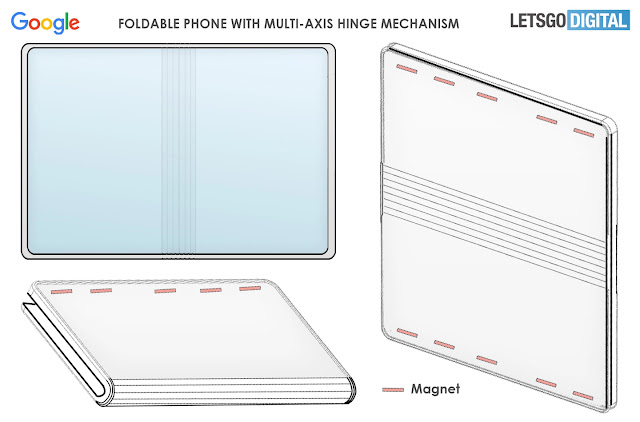 The . PDF file, including a complete technical description and the original patent images, can be downloaded at the bottom of this page. The Waqar-designed Pixel Fold looks quite similar to the Pixel 6 series from the rear. Even though the Series 6 launch event has yet to take place, Google has already announced the design and a few details. The Pixel 6 has a tri-colour design with a vertical camera housing, which protrudes from the body. This is a distinctive and unique design, which the designer has also incorporated into the Pixel Fold. The zoom camera is also reflected in the design. Also watch the animation video below, where Waqar Khan shows the Google Pixel Fold from all sides, in the same color variations as the Pixel 6 series.

See also   [New] Renders of the Google Pixel 6a highlight the design and more.

Last year, it was announced that Google is developing a foldable smartphone called Passport. More specific information about Google’s development brochure continued in July this year. At the time, The Elec and display analyst Ross Young reported that Google’s foldable phones had a 7.6-inch flexible screen. The screen size is similar to the recently released Samsung Z Fold 3. In most cases, Samsung Display’s 120Hz LTPO screen is used. Google, like Samsung, is expected to use ultra-thin glass technology. This makes the screen resistant to scratches and shocks. It is not yet clear which type of screen protector will be applied. Currently, there is no information about the disk set, but it is highly unlikely that Google will use the recently announced Tensor SoC for a foldable Pixel smartphone. 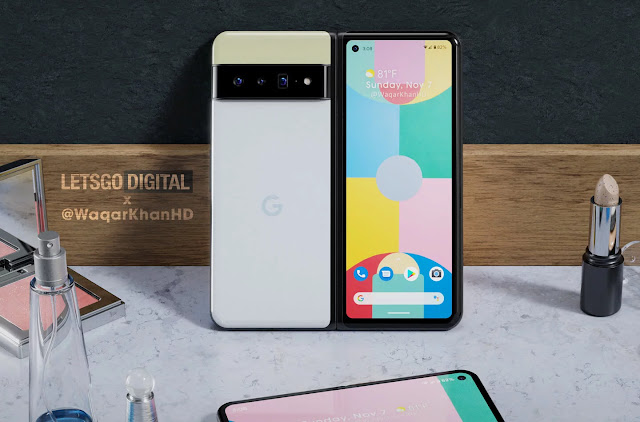 This is the first chip in the Google system. The processor is named after Google’s open source machine learning platform. TensorFlow. Known as the unreleased Samsung Exynos 9855, it offers slightly similar performance to the Exynos 2100 used in the high-end Samsung Galaxy S21 series. This chip was developed in collaboration with Google’s artificial intelligence engineer. According to the tech giant, the Tensor chip supports the most powerful artificial intelligence (AI) and machine learning (ML) features ever created. Google Pixel Fold Currently, it’s not clear what the camera settings will look like. It’s not unthinkable that Google is actually using a less sophisticated camera system. Finally, Samsung also chose to equip its foldable phones with a weaker camera than traditional high-end devices. Google is likely to follow a similar strategy to keep foldable smartphones somewhat affordable. In addition, like the Galaxy Z Fold 3, there are signs that the foldable phone will be the first Google phone with a camera at the bottom of the screen. In May of this year, the company was already patented. For smartphones. A pixel with a camera at the bottom of the screen. On-screen camera. In addition to all the details, it’s understandable that many are interested in optimizing the software that Google implements.

See also  Google plans to invest $9.5 billion in the United States in 2022

It can be inferred that Google has also introduced the new features needed to use the big screen. The company also recently patented a Google Pixel tablet, but it’s highly doubtful that this model will be released. Regarding the release date, Ev Leaks confirmed on Twitter last month that the collapsible Pixel will be officially available by the end of the year. Google has been working on foldable smartphones for two years. The device is under development. With the code name “passport”. The brand name remains unknown. Many assume that Google’s foldable devices, like regular phone models, will fit into the Pixel model line. Google Pixel Fold looks like a logical name because foldable smartphones have a form factor called fold, but I still don’t know. There is a special launch event for this scheduled for October 19, 2021. The Pixel 6 smartphone will be available a week later on October 28th.

It’s not yet known if Pixel Fold will also be on sale. Currently, no pricing information is available. Due to the foldable form factor of the device, the selling price is expected to be around $ 1,800 to $ 2,000. Unfortunately, Google smartphones are not officially sold in the Netherlands. It’s probably no different than a phone. The device could end up in our country by importing gray. You can also buy a Google mobile phone in nearby Germany. Google seems to be developing another foldable phone. 9To5Google reported last month that it is also developing a foldable model called the “Jumbo Jack”. However, Google may initially stick to one model. Maybe a second model will come out in 2022. In any case, the body has a lot of beauty.