The first pictures of Galaxy Watch Active 4 appeared on the Internet. Wear OS x Tizen OS watches are expected to be available in four colours including 40 mm and 44 mm. Galaxy Unpacked event In this event, Samsung will showcase a variety of new products. 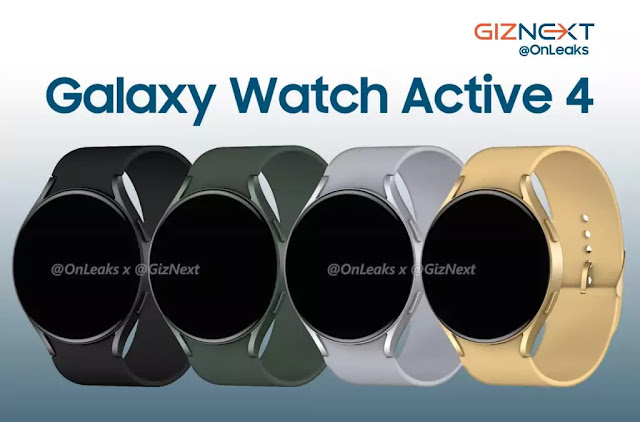 Think about new smartphone models, such as Galaxy Z Fold 3, Galaxy Z Flip 3, and Galaxy S21 FE. The new Galaxy Tab S8 (Plus) tablet is expected to be released at the same time as the successor to the Galaxy Tab S7 (Plus) launched last year. Finally, two new smartwatches will appear: Galaxy Watch 4 and Watch Active 4. The Galaxy Watch 4 series will not (exclusively) run on the Tizen operating system.

Last month, during the Android 12 Beta release, Google announced that it was working with Samsung to update Wear OS x Tizen OS for its upcoming branded smartwatches. Watch Series 4 is expected to be the first smartwatch to run the updated Wear OS out of the box. Galaxy Watch 4 is the successor to Galaxy Watch 3 launched last year, and Watch Active 4 follows the Watch Active. 2 Launched in 2019.

Smart Watch Samsung Watch Active 4Samsung Watch Active 4: The first version of the Galaxy Watch Active 4 in 40mm and 44mm models has appeared on the Internet. The rendering is posted on the GizNext website and developed in collaboration with Steve McFly. The quality is certainly not top-notch, but the first impression of the picture is very good. The watch is presented in four colours: black, silver, green and gold.

We will see this green in the second half of the entire Galaxy series. 2021. Z Fold 3, Z Flip 3 and S21 FE are expected to offer green colour schemes and many other colour combinations. Therefore, the new Galaxy products will coordinate with each other in terms of design and design. Features. According to reports, this new device is available in two sizes; 40 mm for women and 44 mm for men.

Therefore, the Active version is slightly smaller than the Watch 4; the latter is expected to be available in 42 mm and 46 mm models. According to GizNext, Samsung Watch Active 4 will again use a circular screen and aluminium frame. However, there are rumours that larger models will use titanium or stainless steel frames instead of aluminium. In any case, the frame is updated, choosing to fall on a flat 2D glass with a thin border. The shape of the button is slightly different,