Korea FlexDisplay showcases a functional prototype of a foldable smartphone tablet at Korea’s IMID Display in 2021. Earlier this month, the Samsung Galaxy Z Fold 3 and Galaxy Z Flip 3 were officially announced as third-generation folding devices. In the meantime, the display division is busy developing even more sophisticated foldable designs. showed a preview of this multifunctional display device, this time a working prototype. 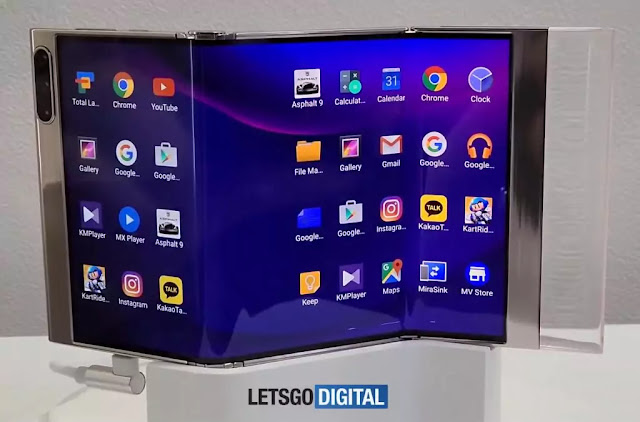 The device was shown at the International Information Conference Exhibition (IMID) 2021. The exhibition in Seoul, the capital of South Korea, is organized by the Korea Information Display Association (KIDS) and the Information Display Association (SID). The 21st edition of IMID will take place on 25 August 2021. Obviously, display makers like Samsung and LG cannot be absent from home for an event of this kind. The multifunctional smartphone Galaxy Z Flex Samsung Z Flex, which Samsung Display showed during the exhibition, features a 7.2-inch OLED display that can be folded in two points.It is also known by the manufacturer as “Flex In and Out“. Therefore, we renamed this device to Galaxy Z Flex.

Samsung has also filed a number of trademark filings for various Flex titles, including the S Flex. The large screen can also be used for split-screen multitasking. The biggest downside to this form factor is by far its size and weight – it doesn’t feel like a portable or practical device. Finally, when folded, at least 3 devices are stacked on top of each other. It is currently a prototype that is still being tested. display. The folding mechanism has not been worked out yet. Of course, the company has gained the necessary experience with the Galaxy Z series. Without a doubt, this knowledge will be used to create a properly functioning Galaxy Z Flex hinge.
See also  Samsung z fold and z flip get round diamond pixel display

if this large screen device supports S Pen. This is likely due to the fact that the Z Fold 3 is also compatible with the S Pen, for which Samsung has developed a dedicated stylus that cannot damage the flexible screen. These types of mobile devices are appearing on the market. Regardless, Samsung has been developing a dual-screen smartphone for several years now.