Apple Watch Series 7 does not have a revolutionary new design with flat sides. Instead, it’s the type of release that teardowns are built for: packed with mysteries that only an Apple developer could fully explain.

Inside, we discovered some startling display technology that would have been a problem to mass-produce, creating a chain of events of delays. The watch had no definite delivery date when Apple eventually revealed it last month, which is a warning flag that usually indicates manufacturing issues. (If you’re curious in how a group of ex-Apple engineers spend their time these days, keep reading—this is the type of costly production mistake they’ve come together to fix.)

Coming to the Watch

The first order of business, as always, is to get inside, and the bigger Series 7 screens aided us in this effort. For the first time, our basic suction handle can keep a firm grasp on the screen, allowing you to carefully elevate it until there’s enough area beneath the bezel to slip a pick below. To weaken the glue, just heat the display; we broiled ours face-down on a heating mat at 80° C. 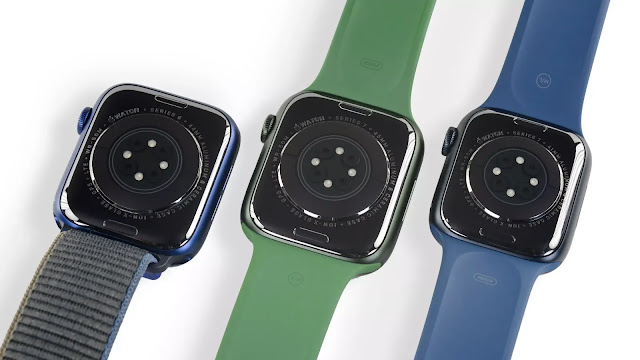 We convened with Creative Electron for the standard X-ray treatment while they simmered. (See the X-ray from our Series 6 teardown from last year.) 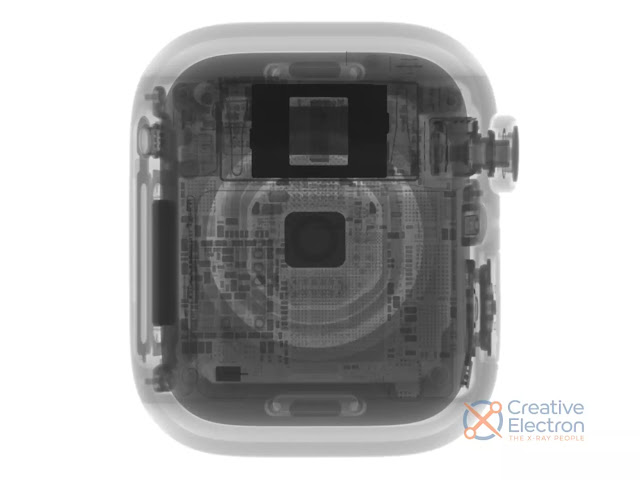 Then all we had to do was get a pick in, pry it open, and make sure we didn’t snag or strain anything within this brand-new device. And we got along pretty smoothly! (It’s wonderful to be able to appear knowledgeable as the original Apple Watch designers peer over your shoulder—no pressure.) 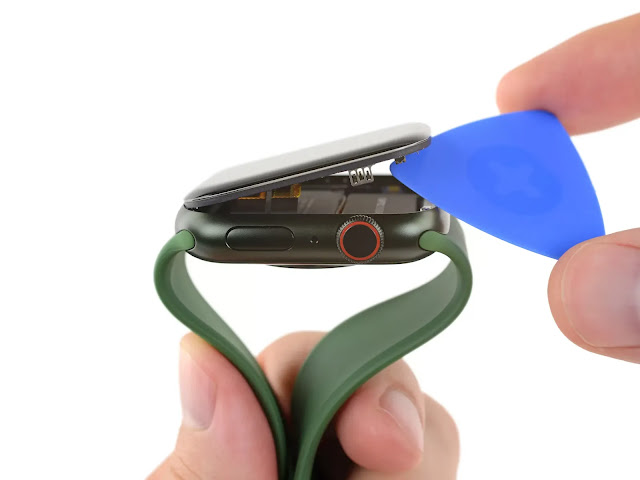 The changes on the inside are modest, but important. Long-time Watch viewers will notice right away that the Series 7 lacks the fiddly bracket below the battery that formerly housed the diagnostic connection. According to rumours, Apple now employs a high-frequency wireless interface. There will be more on this later.

The modifications to the displays are a lot more noticeable. Despite being new and better, the Series 7 display appears to be less complicated at first sight. The classic Series 6 display had two conspicuous flex cable folds: one at the top for the touch sensor layer, and another at the bottom for the OLED panel itself, both clothed in dull green. However, the Series 7 managed to get away with only one flex.

In a summary, this display looks to be a touch-integrated OLED panel, also known as “on-cell touch,” which was first featured in this year’s iPhone 13 range. And that’s a bit unique: typically, the lower-volume watch has been the first to adopt new display technologies (OLED, LTPO, always-on, variable refresh rate), while the massively popular iPhone could catch up later. This time, even if just by a few weeks, it’s the other way around.

While the battery life stays same at “up to 18 hours,” that doesn’t mean there aren’t any modifications to report—we discovered some unannounced adjustments as well.

We identified batteries with somewhat broader dimensions than last year in both 41 and 45 mm form factors, as well as slightly higher capacity and energy density. However, because the new bigger, brighter panels are expected to use more power, this leads to a net-zero improvement in total battery life. Both batteries have the same maximum and average voltages as previous versions, indicating that the cells’ chemistry hasn’t changed.

A side from the screen and battery, the improvements are minor yet significant. Apple appears to have spent some time considering how everything comes together, since removing the Taptic Engine and speakers involves less fumbling with small brackets. In the realm of repair, the sleek design is recognized.

Another “new” feature is IP6X dust resistance. In his assessment, Marques claims that the dust resistance isn’t due to a new design or coating, but rather to the fact that Apple didn’t test for it before to the S7. In general, it makes sense—the watch was already water-resistant to a depth of 50 metres, and dust sealing is orders of magnitude more difficult. (Water resistance is the driving force behind the design, and it requires the harshest tests.)

In a Storm, Any Port

The S7 package is up next, which won’t feature a brand-new CPU this year but may have something else fascinating hidden inside.

The diagnostic port concealed in the watch band groove has been removed, which is one of the more startling outward modifications to this year’s watch. As according rumours, Apple is working on a new 60 Ghz wireless module that, when combined with a proprietary dock, will allow Apple to do the same diagnostics without using a physical connection.

To quote our Instrumental partners, “we’re stunned!” That port was crucial for troubleshooting faulty devices as well as testing and loading software during assembly. (Not that it ever assisted third-party repair technicians, who are still barred from Apple’s service centre.)

We decided to test the feasibility of some typical Watch fixes before passing judgement on the Series 7 in the wake of the iPhone’s disappointing fall into less-repairable seas. Good news: our 45 mm model’s display and taptic engine changes went smoothly. With replacement components from a second watch, all functionality, including automatic display brightness, remained functioning.

Battery replacements had the same results. Even better, watchOS was able to report the new battery’s “health,” which is no longer possible with a “unauthorized” iPhone battery switch.To top it off, the battery we saved from our Series 6 performed perfectly in the Series 7—not ideal, but good to know it works in an emergency!